108 Notes on Deep Work (Review & Quotes Included From the Book)

Rules for Focused Success in a Distracted World
May 22, 2021
EzzEddin Abdullah
Created
by
Updated
May 22, 2021 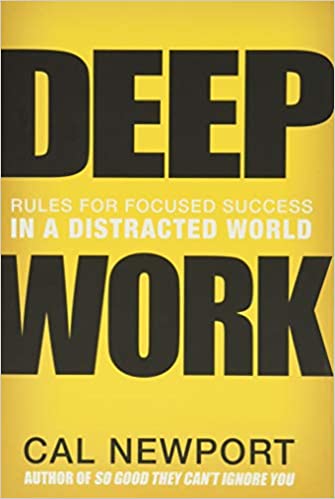 Deep Work was published in 2016 authored by Cal Newport. He is an assistant professor of computer science at Georgetown University. He is the author of So Good They Can't Ignore You and three other books giving advice to students.

This book provides rules and tactics to help you stay focused doing work deeply and avoid shallow work that distracts your productivity.

On a personal level, Deep Work helped me block uninterrupted time to work deeply on my projects being away from the internet and quitting social media for a while. In this blog post, I'll compile my notes on the book that has eight main points:

As always will include quotes from the book and my personal notes and will leave my review at the end.

Deep Work: Professional activities performed in a state of distraction-free concentration that push your cognitive capabilities to their limit. These efforts create new value, improve your skill, and are hard to replicate.

To ask a CEO to spend four hours thinking deeply about a single problem is a waste of what makes him or her valuable. It's better to hire three smart subordinates to think deeply about the problem and then bring their solutions to the executive for a final decision.

In the absence of metrics, most people fall back on what's easiest.

Who you are, what you think, feel, and do, what you love — is the sum of what you focus on

When you focus, your mind tends to fix what could be wrong with your life instead of what's right.

To maximize your success, you need to support your efforts to go deep. At the same time, this support needs to be systematized so that you don't waste mental energy figuring out what you need at the moment.

Resting your brain improves the quality of your deep work. When you work, work hard. When you're done, be done.

Rule #1 taught you how to integrate deep work into your schedule and support it with routines designed to help you consistently reach the current limit of your concentration ability. Rule #2 will help you significantly improve this limit. The strategies that follow are motivated by the key idea that getting the most out of your deep work habit requires training, and as clarified previously, this training must address two goals: improving your ability to concentrate intensely and overcoming your desire for distraction.

The business world understands this math, This is why it's not uncommon to see a company fire, unproductive clients. If 80 percent of their profits come from 20 percent of their clients, then they make more money by redirecting the energy from low-revenue clients to better service the small number of lucrative contracts — each hour spent on the latter returns more revenue than each hour spent on the former. The same holds true for your professional and personal goals. By taking the time consumed by low-impact activities — like finding old friends on Facebook — and reinvesting in high-impact activities — like taking a good friend out to lunch — you end up more successful in your goal. To abandon a network tool using this logic, therefore, is not to miss out on its potential small benefits, but is instead to get more out of the activities you already know to yield large benefits.

Part of what fueled social media's rapid ascent, I contend, is its ability to short-circuit this connection between the hard work of producing real value and the positive reward of having people pay attention to you. It has instead replaced this timeless capitalist exchange with a shallow collectivist alternative: I'll pay attention to what you say if you pay attention to what I say — regardless of its value. A blog or magazine or television program that contained the content that typically populates a Facebook wall or Twitter feed, for example, would attract, on average, no audience. But when captured within the social conventions of these services, that same content will attract attention in the form of likes and comments. The implicit agreement motivating this behavior is that in return for receiving (for the most part, undeserved) attention from your friends and followers, you'll return the favor by lavishing (similarly underserved) attention on them. You "like" my status update and I'll "like" yours. This agreement gives everyone a simulacrum of importance without requiring much effort in return.

In my own life, for example, I manage to read a surprising number of books in a typical year, given the demands on my time as a professor, writer, and father (on average, I'm typically reading three to five books at a time). This is possible because one of my favorite preplanned leisure activities after my kids' bedtime is to read an interesting book. As a result, my smartphone and computer, and the distractions they can offer, typically remain neglected between the end of the workday and the next morning. If you want to eliminate the addictive pull of entertainment sites on your time and attention, give your brain a quality alternative.

I like Deep Work especially for the emphasis on quitting on social media while doing actual deep work. I found the idea of deep work relevant to many uninterrupted times that I had during study and work. I really wish I had read it during college; it would change my mindset a lot and become more focused.

There are many recommendations to books in this book. I really like it and I find the author authentic and very knowledgeable.

As a whole picture, the book is amazing and can help you become more focused and being able to say no to shallow work like social media and replying to some emails and status meetings. On a personal level, I have quit Facebook for a year now and after reading Deep Work I realized it's one of the best decisions I made in my 20s (I may talk about it in more detail later)

You can find Deep Work on Amazon